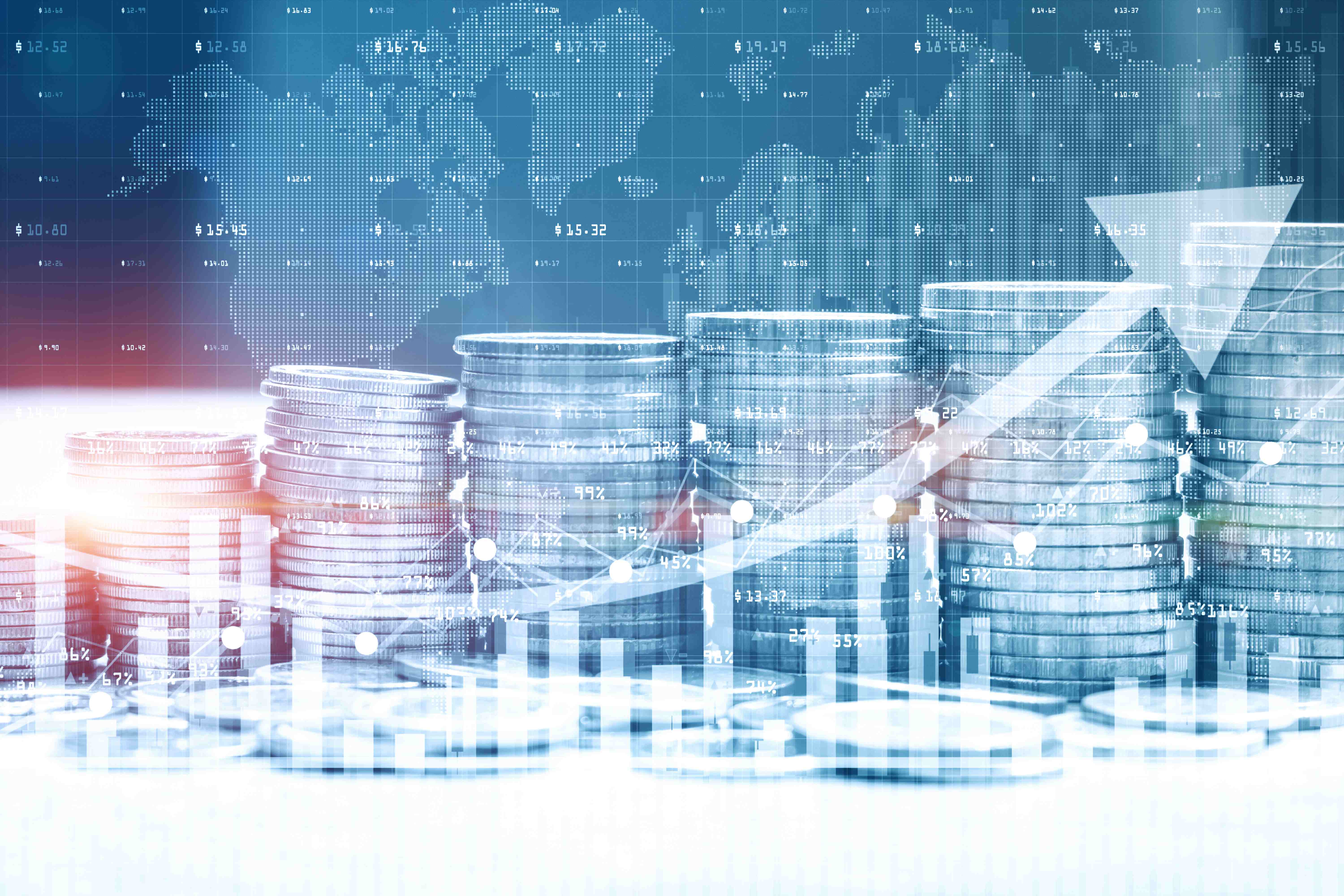 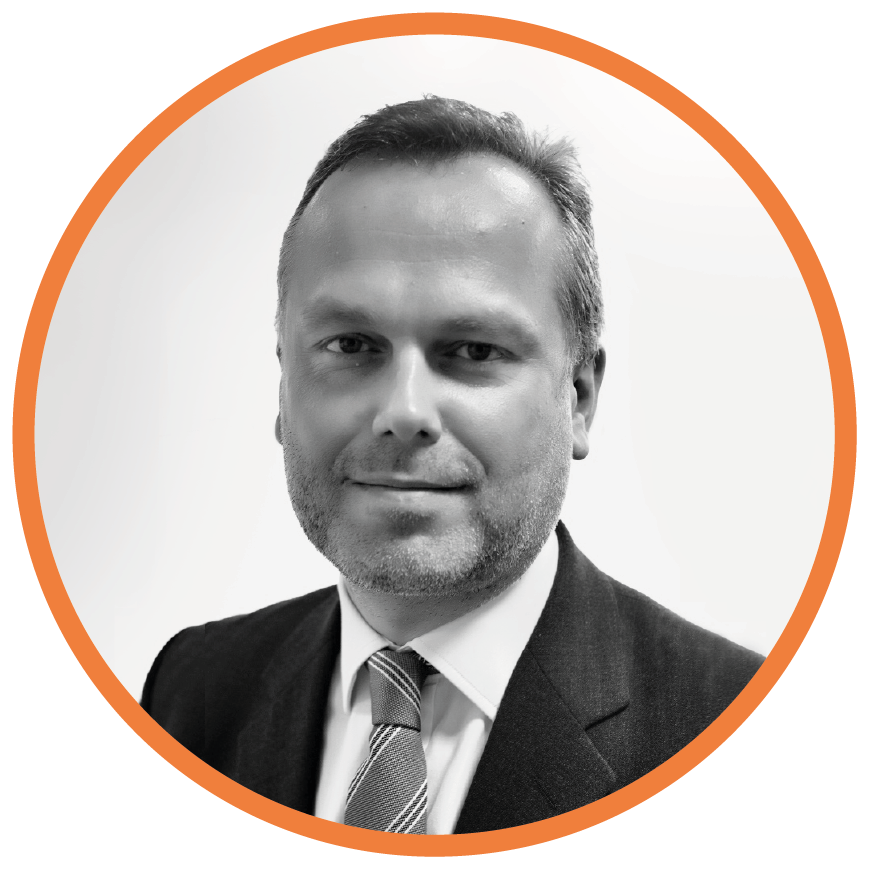 As 2021 draws to a close, it’s time to look at some of the key drivers of M&A activity in what has been a record-breaking year - even more extraordinary given the profound economic and societal dislocations caused by the world’s response to the coronavirus pandemic - and to make some predictions of what could lie ahead.

I’ll be blogging at https://www.sterlingvdr.com/blog on a variety of M&A-related topics that have caught my attention this year and trying to make sense of them in the context of my nearly 30 years working as an M&A practitioner (first as an advisor then in corporate development), an M&A technologist, and an M&A academic. I’m calling this series the “long view” because I want to look back over the past 30 years to try to understand and make sense of what’s happening today, but also to anchor my expectations and predictions in a wealth of data.

I’m going to start this series with a look at M&A valuations. Aligning the target’s and acquiror’s views on valuation is obviously one of the most critical tasks of the M&A process. Valuation is also one of the key drivers of expected returns for acquirors from their acquisitions – the M&A history books are littered with examples of deals that subsequently blew up because acquirors misjudged what the target was worth or the levels of synergies that could be achieved.

In M&A we sometimes talk about the “winner’s curse”, the successful buyer who became intoxicated by the deal and woke up the next morning nursing a hangover having overpaid for her acquisition. Despite the ups and downs of the M&A cycle, we could always rely on the fact that target valuation multiples used to be mean-reverting - there were some periods when genuine bargains could be had.

That doesn’t appear to be the case anymore, or at least not since 2014 – the worldwide median target EV/EBITDA[1] multiple paid by acquirors for targets has been above its 30-year average for the past eight years and shows no signs of reverting to more “normal” levels. In 2021, the median target EV/EBITDA multiple rose to its highest ever level - 16.2x - 37% above its 30-year average. Some of this increase can be attributed to depressed EBITDA levels due to the coronavirus, but the direction of travel is plain to see. 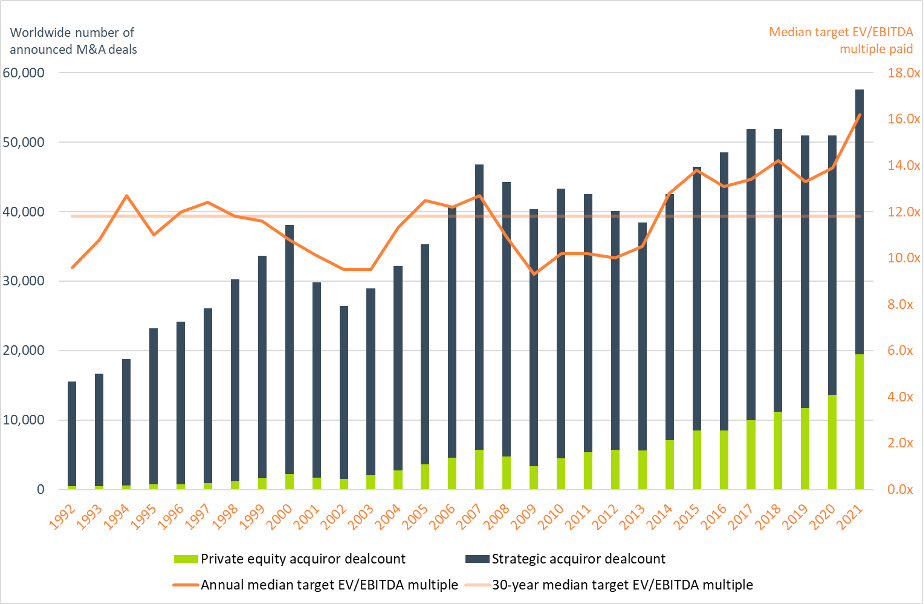 The reasons seem clear - the ferocious growth in competition from financial sponsors for assets that were once hunted almost exclusively by strategic acquirers, fuelled by the coordinated policy by the world's central banks of cutting interest rates to extraordinarily low levels. The latter was first put in place following the global financial crisis of 2007/08 and then again as the response to the coronavirus pandemic. Record low interest rates had the effect of lowering the global cost of capital, reducing discount rates for risk assets (thereby increasing valuations) and making cheap-debt-financed acquisitions more attractive – perfect conditions for private equity. Private equity has been steadily increasing its share of worldwide M&A since 2009: PE acquirors accounted for 34% of all M&A deals in 2021 compared to 27% in 2020 and less than 3% 30 years ago.

If you are a strategic acquirer, then private equity is coming to eat your lunch - or to eat you. How can corporate bidders respond to these conditions? One way is to place an even greater emphasis on synergy evaluation as well as a well-planned, well-executed and rapid post-merger integration process. Experienced, serial acquirors know that the key to realising the hoped-for revenue and cost synergies, strategic fit, cultural integration, and increased shareholder value that underpinned the deal rationale depends on a successful PMI. Sterling recently penned a guide to maximising deal success through PMI, which can be read here[2].

Looking ahead, it seems almost certain that interest rate rises are on the cards in 2022, the question being only how many - and how far central banks will go to try to normalise monetary policy. The emergence of new variants of coronavirus such as Omicron and rapidly increasing infections may make central bankers hesitate and look for further evidence of economic impact before pulling the interest rate trigger.

Some have chosen not to wait - on December 16, the Bank of England became the first major central bank to signal concerns over rapidly rising inflation (which hit a 10-year UK high of 5.1% in November) and increased interest rates from 0.1% to 0.25%, the first such increase since 2017. The US Federal Reserve chose to leave interest rates at 0.25% at its December 15 policy meeting but signalled a more aggressive stance on inflation by quickening its plan to raise interest rates in 2022 and beginning to wind down its bond-buying program earlier than expected.

Rising interest rates may moderate the pace of some private equity dealmaking in 2022 but they are unlikely to make a serious dent in the appetite of financial sponsors for deals – with over $2.5 trillion of private capital dry powder available to be spent on acquisitions, the industry cannot afford to sit on its hands.

For more information on how Sterling Technology can help make your next deal a great deal better, please complete the form below or contact us.